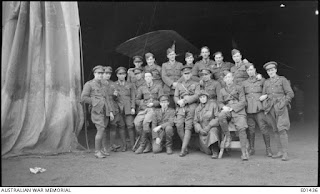 A casualty of the Great War, Harry enlisted in the Australian Imperial Force on 17th September 1914 at Victoria Barracks, Sydney, initially with the Australian Army Services Corp. He later transferred to the Australian Flying Corp. He was awarded the Military Medal as a soldier and Military Cross as a Pilot before being killed in an aerial collision at Tetbury, England, aged 29 years.
He flew for many hours and took part in dog fights across the trenches, including the incident leading to the death of the Red Baron - His regiment were responsible for Manfred von Richthofen's burial with full military honours.  Harry suffered serious concussion in crash landings, surviving until his tragic death in August 1918, buried three days later at Birmingham Lodge Hill Cemetery.

Copy of extract from Second Supplement No. 29794 to the London Gazette of 20th October 1916 relating to the conspicuous services rendered by No. 1489, Corporal H. Taylor, 8th Army Services Corps.


"AWARDED THE MILITARY MEDAL
HIS MAJESTY THE KING has been graciously pleased to ward the Military Medal for bravery in the Field to the undermentioned non commissioned officer:-
No. 1489 Corporal HARRY TAYLOR."


"AWARDED THE MILITARY CROSS
HIS MAJESTY THE KING has been graciously pleased to approve of the above award to the undermentioned officer in recognition of his gallantry and devotion to duty in the field:-
Lieutenant HARRY TAYLOR, M.M.
For conspicuous gallantry and devotion to duty. Whilst he was engaging enemy troops his machine was shot down and crashed in the open. On crawling out of his machine he was fired upon by enemy snipers whom he engaged with a rifle which he had picked up. He eventually made his way back to one of our patrols, carrying a badly wounded man whom he had discovered on the way. On a later occasion, when flying at 1,500 feet, he engaged an enemy two seater which dived steeply to the ground and crashed. He is a clever and daring pilot and is always ready to perform any kind of duty."